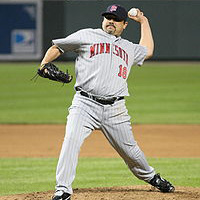 ​His common nickname is “Everyday Eddie”, a testament to his durable arm during his first stint with the Twins.