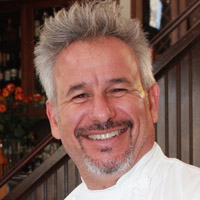 Los Angeles Rising Star Chef Raphael Lunetta is one of the most talented and well-known chefs in southern California. In May 2008, JiRaffe received the prestigious “Fine Dining Award” from Nation’s Restaurant News, showing Lunetta continues to soar as one of LA’s premiere chefs and personalities.

As well as for his work in the kitchen, Lunetta is known for his second passion surfing, and has gained the title “the surfing chef” as he is often seen on Southern California beaches spending time in the water.

Lunetta was named to the prestigious group of “Top Ten New Chefs” by Food and Wine Magazine (April 1997) and “Rising Stars 1997” by Restaurant Hospitality Magazine (May 1997). Additionally, Lunetta is a favorite special guest chef on several shows at the national Food Network and has appeared as a guest chef at many locations throughout the world, including Hawaii, Orlando, New York City, Bali and Singapore, Sundance Resort, Utah and on Crystal Cruises. In 2006 he was a guest chef for BRAVO TV’s “Top Chef” series when Top Chef Tom Colicchio brought the show to Los Angeles. In July 2007 he was a guest chef of famed Chef Alan Wong at the Hualalai Grille at Wong’s restaurant at the Four Seasons hotel, Kona, Hawaii.

Raphael is a true “favorite son/chef” in his hometown of Santa Monica and was named to the Santa Monica High School “Hall of Fame” for its outstanding alumni. He is married to television news personality Gabriela Teissier. They have two sons.